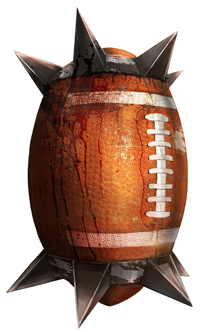 Dungeonbowl, as its name suggests, is played in a dungeon and is a variant of the mighty popular Blood Bowl! The teams move about using teleporters, and must begin the game by searching for the ball hidden in one of the trapped chests scattered throughout the dungeon. Once the ball has been found, there’s a furious battle for possession – the first team to score a Touchdown wins, so the game is hard-fought and fast-paced!

The Dungeonbowl league is sponsored by the ten Colleges of Magic, and each College also supports one of the teams taking part in the tournament. Even though the idea was originally to settle the matter of which College was the most powerful, and was to be a one-off event, Dungeonbowl has now been going for over 20 years and shows no sign of ending in the foreseeable future. The current holders of the cup are the Blood Axes, who were supported by the Bright College in the last Dungeonbowl. Of course the other colleges say this was a fluke, and are carefully studying the form of the best teams in preparation for the next Dungeonbowl.

As well as receiving the magnificent Dungeonbowl trophy, and a substantial cash reward, the winning team also receives the services of a Wizard from the College of magic that supported them, who will serve with the team until the start in the next Dungeonbowl tournament the following year.

The Dungeonbowl is played in special underground stadiums built and maintained by the Colleges of Magic, and watched on crystal balls throughout the Old World via Cabalvision.

Dungeonbowl may be an open-minded bloody sport, it still follows a few rules.
The game uses the basics of the Blood Bowl with some minor tweaks :

The ball is hidden in a chest, the first team which will score a touchdown wins, there is no score keeping.

There are 6 chests on the field, 5 of those are booby-trapped. The wizards love special effects so those traps are dangerous.

There are some teleporters on the field. Resulting from a state-of-the-art technology, those gates allow the players to instantly cross the dungeon across the warp. Some say that it may be dangerous… do not listen to them, it usually works well.

Teams are representing colleges of magic, each made up of 3 different races.

Punching, Kicking or Killing competitors is not forbidden!